I don’t think it’s any exaggeration to say I wouldn’t be doing what I’m doing today if it weren’t for the Wii LoopMachine. That crazy project developed in my dorm room and finished in the University of Edinburgh Sound Design studios at 4am on deadline day four years ago took off in completely unexpected ways, and lead to my work being shown all over the internet, in newspapers, and of course of Dragons’ Den. It lead to collaborations with amazing game developers, artists, performers, and many others, gave me visibility that lead to artistic residencies, grants, and contracts, and allowed me to found Lucky Frame three years ago last month.

Lucky Frame, I’m happy to say, is about to embark on a very ambitious and awesome (in the truest sense of the word) project which we will be announcing in more detail in the coming weeks. I have had very little time to work on the Wii LoopMachine for the past year or so as it is, so this seems like a good opportunity to turn the LoopMachine into freeware. Details can be found on the official website, but in a nutshell – the full version of the LoopMachine is now free to download. The website will remain intact, and if you want any Max patches just let me know. I will still be using Wii remotes for various projects here and there, and I’ll post them as they happen. If you’d like me to develop any Wii-based music software just get in touch!

On a side note, the release of the Kinect and Playstation Move have certainly stolen a bit of thunder from the Wiimote. These are both very exciting interfaces to say the least – a wonderful friend sent me a Kinect recently and I’ve only just starting exploring the possibilities it offers. However I think that the increased power of these interfaces is in some ways offset but the exponential rise in complexity in terms of coding and development. Whilst Wiimotes provide a steady stream of numbers for each axis, the Kinect creates a full 3D map of a space, and it is much harder to create a system to use that in a creative way. I think this hurdle could be overcome by the recent SDK announcement, but for the time being I still believe that “simpler” technologies like Wii remotes have their place.

Hey folks. Just a quick word to say that I’ve started a Facebook page for The Amazing Rolo. If you like what I’m working on, and you happen to have a Facebook profile, please feel free to click “Like” in the left sidebar to become a fan. Thanks!

See you in San Francisco?

Next week I am going to California for the very first time, where I will have a stand at the Maker Faire, an intimate gathering of 80,000 of my closest friends. Over the next week I will be getting all sorts of stuff together for the trip to San Francisco, and of course I will be documenting it all here and on my Wii LoopMachine site. Check back soon for video and software download treats, and maybe even some special gifts for Faire attendees!

click for a pdf of the Maker Faire poster

You may notice that things are going through some fairly big changes in this corner of the internets. I’ve completely revamped my websites, in order to keep things better organized and updated.

Bear with me while I update everything – it will probably be a few days before everything is running smoothly! In the mean time, any thoughts about the design, layout, structure, etc would be great. Also, if you find anything broken please let me know! 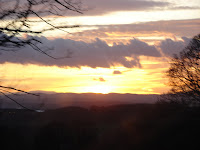 I’ve just updated my Movies page so that the videos now use Vimeo. This means they load nice and fast in a fancy little player, and should never cause any problems ever again. That being said, let me know if you have any problems.

Thank you very much to everyone who came to the show on Sunday, it was loads of fun and we’ll have to do it again some time. Eventually I hope to put some video and audio from that show up on this website, I’ll keep you posted. 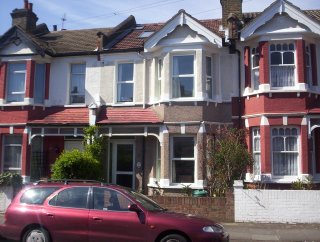 The house in Tooting. 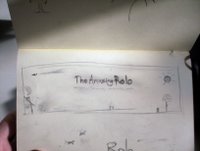 Tonight I’m leaving for the UK for a week. I’ll be stopping in London and Edinburgh on a fact-finding expedition. Hopefully in about ten days I’ll get back to posting mp3s and movies (and probably a few pictures from the british isles). I’m particularly excited about a large-scale stop motion animation that Aurelia and I will be working on…more on that when I get back.

In other news, my “podcast”, if you can call it that, is now available on iTunes! If you have iTunes on your computer then click here.

If you have gotten to this blog through iTunes – welcome! Be sure to check out the archives and links for all sorts of original music and movies and more. And I would love to hear from you.

I’ve arrived in Pittsburgh, and I’ve unpacked most of the stuff from my car. That’s my new house in the middle. The blue one. 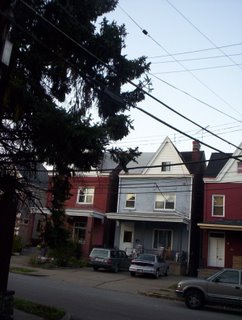 My room in miniscule, and I will henceforth refer to it as my cabin, since I feel like I’m living on a boat. I think my room will be the subject of another post entirely.

For now my plan is to get as many projects done as possible. Among my projects: 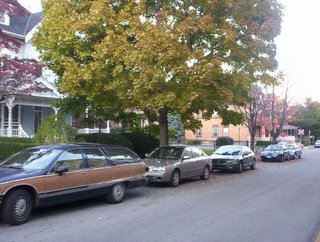 And that’s the short list. So I’ll be keeping myself busy. This blog will become the public diary for my endeavors, and I hope to update it every couple of days, so check back soon.