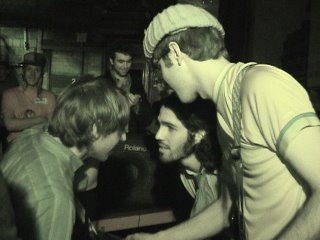 The past few days have been spent working on the Seznec Brothers recordings, which are turning out well, a little bit of Rolo music, and my Handface documentary.

For those of you who don’t know, Handface is my band. Well, I suppose it was, since the drummer is now off in Chile for six months.

In any event, a few months ago I realized that the Handface story is compelling, funny, and in a way is an analogy for (among other thing) Pittsburgh, Carnegie Mellon, techies vs luddites, America vs TheRestOfTheWorld, etc etc etc

So I decided to make a documentary that would show all of these things. I finally settled on making a series of short audio-only pieces that would then be animated by my friends (and me).

Handface was composed of three people, who I will call Alberto, Jon, and Yann. Handface theorists often point out that Alberto represents the acoustic, Jon the electronic, and Yann (me) the electro-acoustic…therefore I figured that a good way to start the project would be by making short vignettes about each of the three members that somehow epitomize their characters.

All this is to say that I have finished the outline of chapter one, and you can listen to it here:
A Story About Techno

I would strongly suggest listening to it on headphones or real speakers. Laptop speakers won’t cut it for this one…

This episode is about Jon. He wrote the story, which can be found on his blog. When I read it I was struck by the stark imagery and poetic quality of the text – I found it reflected his personality quite well. I wrote the music, which is a remix of a Handface song.

It looks like my friend Aurelia will be helping me with the animation for this episode. I will probably add a lot to the soundtrack once the animation is finished, but I thought you all would be interested! Questions, comments, and suggestions are always welcome.