As we speak is an artists video screening night in Glasgow dedicated to the promotion of new contemporary video works. The next one will take place on January the 20th 2009 in Stereo, Renfield Lane (behind Central Station). Free entry.

See the As We Speak myspace page for more information.

To celebrate, here is the video that will be shown, for those of you who can’t make it (including me, unfortunately!). It’s called “Darkness”, and it’s a strange abstract sci-fi short story about what would happen on a planet where sound and light do not act in the same way they do on Earth.

The concept of a planet where light and sound are reversed is an idea I’ve had for a while…it has some pretty interesting implications, and I find it generally fascinating to think that light is made up of vibrations, just like sound, but that those vibrations are so fast that we can’t hear them. That has always seemed rather arbitrary to me, and I love to think about what life would be like if we had evolved to hear the frequency band that we now perceive as light. Even more fascinating, perhaps, is the idea that everything is made of vibrations anyway, as illustrated by string theory.

But I’m getting out of my depth! Back to the video…whilst sketching out the concept for “Darkness” I wrote a short story and made an image to explore the ideas. The short story eventually turned into the narrative for the movie, and you can see that image here: 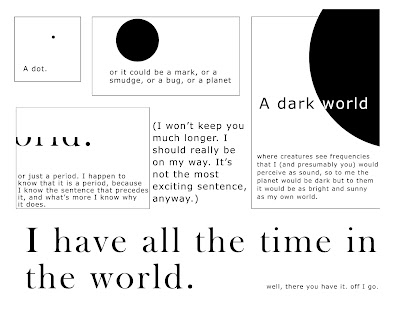